Dunwich just woke up in Devilfish with no idea of where she is, why she is there, or who she is. 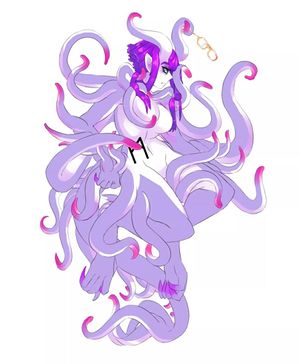 Dunwich has violet hair, pointed ears, and soft lavender skin with a white front on her face, chest, stomach, inner thighs, and the undersides of her tentacles, which are tipped with hot pink. A tattoo of a mannaz rune rests on the right side of her stomach, large enough for the top and bottom to creep onto her ribs and thigh respectively. She has no genitalia. She has a long prehensile tail and tentacles that range from 1 to 10 feet in length which originate from her tail, thighs, joints, arms, back, shoulders, and head. There are 20 long ones and 16 shorter ones. She stands at 6 feet and 7 inches in height, although she often hunches to a more reasonable 6'3". She can lift herself off of the ground with her tail though, attaining a maximum height of 7 feet and 10 inches. She has small fangs in her mouth and her eyes have black sclera with neon blue irises. Her legs are bowed and her arms are longer than normal, with her fingers and toes ending in sharp claws.

A general knowledge on topics of mythology or Lovecraftian fiction.

Dunwich is timid due to her fear and anxiety at a world she doesn't recognize while trapped in a body that feels foreign, but she is highly vindictive, remembering every slight against her and holding grudges to great ends. She has a strong moral compass, leaning towards a neutral good alignment, but this can give way to something a little darker when facing someone she holds a grudge against. Aside from those flaws, though, she is a generally pleasant and kind person.

Dunwich's power manifests nearly entirely in her physiological changes. She looms over most people, standing at 6 feet and 7 inches (2 meters) while on her feet, but while perched on her tail she can attain a full height of 7 feet and 10 inches (2.4 meters). She has an enhanced musculature, enough to let her compete at professional levels with effort but nothing outside of the realm of human possibility. Her limbs are especially long, allowing her further reach than a normal human and while she is capable of fine manipulation of objects, sometimes the claws that tip her extremities give her trouble. The main "power" of hers manifests in the many tentacles that sprout from her limbs and other extremities. 20 of these tentacles, ranging in location from the tip of her tail to her shoulders, are usable as separate limbs, long enough to reach about 10 feet out. 16 more tentacles exist at places like her wrists and at the top of head which are only a foot or two long. The longer appendages are strong enough to pull her along surfaces rapidly, enhancing her speed to about 40 miles per hour (64 kmh) at a dead sprint, which she can maintain for a decent time. She can turn easily enough at this speed or climb up walls and over obstacles, but sharp turns and about-faces force her to slow down a bit. Otherwise, her casual pace is about 15 miles per hour (24 kmh). Her tentacles are also dexterous enough to assist Dunwich in using objects around her or grappling an opponent.

Her tentacles also offer her offensive capabilities in the form of electric shocks. When she strikes an opponent with her tentacles, she can discharge electricity, usually enough to cause pain and a momentary loss of control, although two or three shocks can completely numb parts of the body. With this limited electrokinesis comes a resistance to electricity in the form of absorption of the energy. This can be achieved by jamming her body parts into electrical sources and draining the energy from them, by being struck by lightning, or by intercepting electrical attacks. When the energy is stored, Dunwich experiences strain and has to concentrate to keep it in. The more energy that is stored, the harder this becomes. If it is something massive like getting hit by lightning, keeping it in will likely be the only thing she can concentrate on. Moving is difficult, and getting hit or surprised guarantees the release of the energy. It's a very all-or-nothing, last resort sort of move. Holding the energy in for more than a few seconds would be intensely uncomfortable, akin to holding down way too much alcohol, and something that she would release at the very first chance. If it's something intermediate, moving is easier, but getting hit or being surprised would have a chance to knock the charge out of her, and then there's the chance of it backfiring on her. After a few minutes, it would probably get to be too much, and holding it in would make the discomfort get worse and worse until it's like the aforementioned lightning bolt.

If she absorbs electricity from something small like a taser battery, it is enough to cause intense pain and then numb a whole limb, knocking someone back a few steps with the force of the discharge. The numbness lasts about 15 or 20 minutes before fading into tingly sensations. She can stack these smaller absorptions into a single discharge before entering truly harmful territory, causing light burns like red marks and numbing multiple body parts at once for longer, closer to an hour. If she absorbs power from a street lamp or a mild electrical blaster power then she can leave people with electrical burns and blast them backward several feet, numbing their whole bodies for about 1 to 3 hours. Feeling would return much more slowly than movement, and tingling would last for about a day. Something massive like a lightning bolt or tapping into a power plant would probably instantly put a normal person into critical condition, blasting them back with the force of a genuine explosion. If someone is durable enough to take that kind of strike though, but presents no answer to the numbness, it'd last for something like eight to twelve hours. Feeling would return much more slowly than movement, and uncomfortable tingling would last for a whole day.

With this boon in power comes a risk of harming herself with the discharge though. Sometimes, if Dunwich gets unlucky, she will experience detrimental effects from the electrical attack, getting blown back and shocked herself. This always comes with a temporary loss of the ability to use these attacks, usually about a minute or two depending on how much electricity she used.

She had gone quite a bit too far and she knew it. She, a nobody with no powers and no connections, had conned and connived and seduced her way into the upper echelons of a villain gang. Her wealth? Nonexistent. Her connections? Falsified. And they were all about to find out. Panic had well and truly set in, and she was now a very desperate woman. In her frantic search, she came across something known as Coven. A rumor, a conspiracy, nothing more than so many straws for those who desired power to grasp at. But still, she grasped, and after weeks of barely keeping up her facade, the villains finally figured out what a sham she was. They were here, now, slamming their way through her house, yelling out taunts and threats of just how horrible a demise she had brought upon herself. She cowered upstairs in her room, rocking back and forth on her floor in mindless panic as tears streamed down her face. A hand appeared on her shoulder, and she nearly shrieked. A woman entered into her field of view from behind her, a woman who looked kind, yet calculating.

"What are you willing to sacrifice?" She asked, plain and simple. They both knew exactly what she was asking.

"Anything," she whimpered. "Everything. Please, please, oh please, save me."

She woke up in an alleyway, a single large, tattered cloak draped around her shoulders. Confused, she blinked at her surroundings. Where was she? Why was she here? And most terrifying of all, as she looked down at herself and saw what she was, who was she?