Leader of the Devilfish Mafia, she was previously a gang leader of a small street gang in Chicago, and before that an Enforcer for New York's Five Families Mob, to whom her organization is simply a branch of.

She is a teleporter and a combat thinker, using guns and crossbows as her vector of transport, she is extremely dangerous to fight up close, and is still a threat at a distance. The Most Mobile member of the Devilfish Mob, if you're fighting the Mob and they get quick reinforcements, it's probably gonna be her showing up.

She has been involved in numerous fights, several altercations with Helios, who she is shipped with heavily on PHO, second only to her shipping with Black Dove, and the love triangle fics are insane. 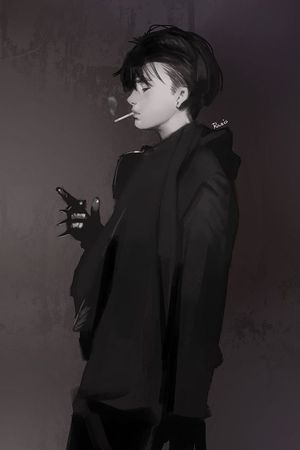 Dorothy in her civilian life. 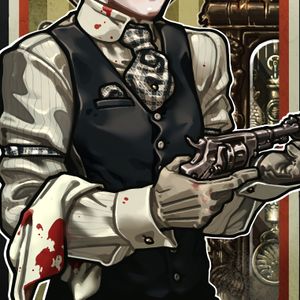 Dorothy is a Caucasian woman who looks to be in her late twenties, with short black hair in a sidecut hairstyle. Dorothy has permanent dark-spots under her eyes, even when Dorothy has had plenty of sleep, and is feeling lively.

She stands at six foot three, and is built like a professional MMA fighter with the muscles to match. When having a casual off-day Dorothy adheres to a grunge aesthetic. Dark colored Flannel, oversized t-shirts, chokers, and step-on-me combat boots are a common look for Dorothy. Though she is also rather fond of suits and the old mobster aesthetic.

Duelist's costume consists of a highly customized suit of armor, with steel plates that are painted black and green, the gauntlets and boots are made of leather. The Left side has a short green duelist cape, and the helmet has a small plume. Duelist wears a padded jacket underneath the armor plates to help maintain a bit of a more comfortable and snug fit. They also wear a small domino mask under the helmet incase it gets knocked off in combat. She also has what she calls 'business casual' which consists of a finely tailored suit/tie combo, along with her Helmet, Domino mask, a Bullet proof vest, and a number of holsters. For those occasions where she needs to be Duelist, but don't want to wear a whole ass suit of armor.

Duelist is the head of a small but growing branch of a nation-wide criminal syndicate, she has access to decent funding for helping her bosses as needed, as well as making profits off local prostitution, drugs, extortion, and robbery.

She used to live out of a surprisingly well-maintained, well-furnished RV, which she’d put a decent chunk of their time and resources into renovating, but usually alternates where she sleeps, and keeps her RV stashed for Bugging out in an emergency.

Three sets of armor, lovingly custom-ordered from a metallokinetic in Chicago whom they are on good terms with, made for use in Dorothy's cape ID.

Duelist is a serious person who has long since accepted being a bad person, she has no qualms about torturing, maiming, or killing. Though she isn’t a mad dog who doesn’t understand the meaning of the word restraint.

She enjoys a bit of Dramatic flair, leaning on people's preconceived notions and Tropes as necessary to make her point come across better, or to increase reputation.

She believes that as her father taught her, a person's word is important, in light of that she tries to keep to her word when possible, but she won’t let herself get jerked around by someone trying to trick her or use her sense of honor to manipulate her.

She has trouble finding time to be a person, rather than just a cape, and could use some honest companionship. She has lieutenants, but has yet to go beyond anything more than a business relationship with any of them, though she has some mundane mobsters she gets along with more than others.

Duelist can create up to three (3) constructs.

These Constructs may be formed into any (mundane) melee weapon, tool, or ammunition she has observed, whether that be directly, or through a picture or video, once observed she has it saved forever. (EX: Sword, power drill, grenade, Bullet, Spatula, paintball, taser, etc)

She possesses a special awareness within eight (8) feet of a construct that gives her tactile and proprioception of anything in the area, This sense is twofold in that it helps her judge where she can Teleport safely, and makes positioning in melee combat easier. She can Teleport with anything she can carry, including people (assuming she can carry them)

Her power grants her mastery of any weapon/tool she holds (whether it be a construct or not). This isn’t anything superhuman, she can just perform skillfully at the level of an extremely well trained human who is wholly comfortable with the implement at hand.

Born as Dorothy Russo, Dorothy's parents were deeply involved with the New York Mafia, Her father being a well-respected capo. Her upbringing was fairly traditional for a New York Italian. Her parents were good to her, making sure she kept out of trouble, instilling in her the importance of loyalty and comradery.

Meanwhile a contingent of the local mafia, a group of Mid-to-High ranking Capos were planning on bolstering the forces of their parahumans, they had finally made arrangements with a mysterious benefactor who promised they would empower a number of individuals for them.

It was decided that those they would choose would need to be of their own flesh and blood, in order to ensure loyalty. Dorothy was approached by her father, whom she idolized, and given the offer, promising her that she could be her father’s right hand in his part of the organization, but warned that the Benefactor required her to give something up as an offering. This did not deter her in the least.

When she was growing up she only really had one good friend, and that had lasted even into young adulthood. When she was brought before the benefactor, she bargained away her friendship. Of course she doesn’t remember that there ever was a friendship, but she felt a profound sadness when remembering key moments of her childhood, and she never quite understood why.

Empowered her father saw that she got the time and resources to train, while her powers weren’t the most impressive of the new Mafia capes, she wasn’t a pushover, and her father was true to his word, she became his right hand.

The Mafia (at least the family she owed allegiance to) wasn’t the kind that made headline news by letting their capes duke it out with the New York Protectorate. And most of her interactions with other capes was her mob allies or dealing with upstart villains and heroes who thought they could get one over on the Mob.

This went on for several years, before her father was killed, she didn’t even get the satisfaction of revenge, as the hitman had been gunned down before she could get her hands on him. She stayed long enough to ensure that her dad’s legacy would be handled by one of her uncles, before she left entirely. Her uncle knew she was loyal enough that she’d come back if he called, but also that she needed time to herself after all this. She’d come back on her own terms, and in the meanwhile he had other capes than his mourning niece to call upon.

Dorothy found her way to Chicago, knowing that she needed to get out of New york if she didn’t want to get drawn back into mob business. She found her place in a street gang, as an enforcer, it was familiar enough to feel like home. But the leadership changed after an unfortunate drug bust, and those in command she had been on such good terms with went to prison. She bid farewell to the gang, and set out to start over… again.