Cylynx has graduated to the Devilfish Protectorate after her time in the Wards, having been transferred down to Devilfish after an incident during a cape conflict in Edmonton, resulting in the loss of life. As a full time Hero and open ward of the state Cylynx is proud to share her stories, for the most part, during her albeit short time in the Wards up north. Even if she shouldn't share that information.

She is known for her interactions with villains going one of two ways; she will either attempt to defuse the situation as she did when Iron Maiden attacked a dance studio or she will fight aggressively to her own physical detriment until there is a clear victor. 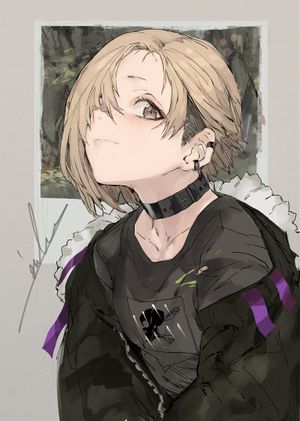 Anetta has been an influence on Alia's choice of clothing.

Cylynx's haircut, giving free access to the underside of her skull.

In costume Cylynx is a firm believer is a Hero's sworn duty, to protect those who cannot protect themselves even if it means being in harms way, going as far as to disobey orders to stay out of fights that she cannot win.

Out of costume Alia is slower, not anti-social but seems to be constantly tired. Likely from being so high energy as Cylynx, not that she'd ever admit that she acts too differently between the personas.

Addendum: Allowed to collaborate with others. Apply personal augments to others.

Born and raised in Wetaskiwin Alberta, had a relatively normal childhood though a minor cape geek. Alia was kidnapped while leaving a Seven-Eleven where she'd stopped to grab a snack on the way home from school.

A blonde teenage girl sits on her bed, shrunk back in the corner to make herself as small as possible. The room is lit by a single, flickering florescent bulb hanging from the ceiling. The sounds of yelling and an occasional gunshot echo into the room; each one drawing her eyes to the door for a moment before she sniffs and looks back to the mattress.

The silence stretches on longer after the last gunshots. She begins to worry, not about the people outside, but about what will happen to her if she's not found. The anxiety is the most potent emotion she's experienced in what feels like years to her.

Eventually the door opens with a click and a man joins her in the room, sitting on the edge of the bed and tapping his foot with impatience. "Today, girl. It's been stressful." She's weak, hungry, and broken but still responds exactly as she's been trained.

Her body is a weapon, used against her and conditioned to respond to their wishes... The Protectorate isn't coming. The PRT isn't coming. The Police aren't coming. Alia Long has been here for years, and the harsh reality finally sinks in as she goes through the motions.

She triggers and the man doesn't even notice. When she regains focus her mind is full of ways to become stronger, to never let herself become that again.

Further notes: Cylynx was still held by the criminal elements for another several months until she accumulated enough resources and supplies to preform her first self surgery, allowing her two claws with which she executed one of her captors and injured another (resulting in his death) before escaping and fleeing, being lucky enough to encounter a police patrol car (Sadly in a more direct way, the car was undamaged and Cylynx only had three cracked ribs.)