Known to the public as a cape who makes 'memetic art pieces' specifics are sparse, but has cooperated with the PRT enough to ensure a lack of long-term effects.

Curse is a fantastic multi-disciplined artist, even without the air of Mystery, or his parahuman powers, Curse would be renown in some circles.

The three factors together places him firmly in the celebrity category. Having appeared on a number of prime time talk shows, and was the host of the 2018 Youtube rewind.

Contrary to what might be expected, rather than only the most prestigious art museums getting to show off his art exhibits, Curse prefers to donate and lease them out to a wider variety of institutions, having been quoted as saying 'Art is for the Masses.' 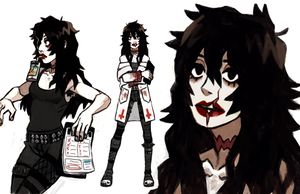 Curse out of costume.

Curse dresses in a somewhat pretentious body suit that conceals all their features, but is made of airy breathable material. With lots of pockets for odds and ends, gear, and art projects.

They themself are about 5'4" and has long dark unruly hair, they have a number of scars foremost among them one that splits her lips, and around her throat and collarbone.

Outside their costume, Curse wears clothes that are somewhere between goth and punk, mostly Black and other dark colors.

Curse is quite wealthy, having a significant and hefty investment portfolio, they mostly leave that to the professionals, and just takes his share of the profits.

They donate to a number of charities, foremost among them a charity for the victims of Masters and Strangers, called 'Friends and Equals'.

Their material belongings include a personal property in LA, that sees seldom use. As well as their custom 'Tiny-home' Tour-bus[1] and their mobile workshop[2]. 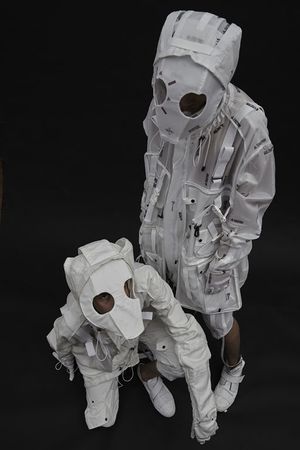 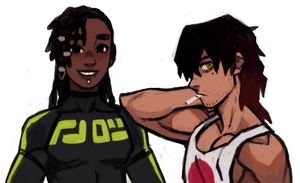 Hex and Jinx out of costume.

Curse has two 'henchmen' named Hex & Jinx. AKA 'Astrid Smith & Jorge Avery' The Three of them are in a long-term Poly-amorous relationship, and they live together on the Tour-bus.

Hex (Astrid): A Jock, Astrid is extremely jovial and outgoing, she is the one that makes sure curse eats enough, and keeps Jorge from getting into trouble. She is also the one most likely to crack your head open if you hurt either of the other two.

Jinx (Jorge): Jorge is the smart one, he does computers, and helps the other two in ways they don't even realize, namely fact checking, research, and looking into laws, so they can find loopholes, and avoid being arrested for an exhibit . He has 'small dog' energy, he's not a push over, but overestimates himself at times.

Curse, Hex, & Jinx's costumes are all made of relatively durable materials, more breathable than would be expected. Underneath they typically wear Ballistic Vests, knee and elbow guards, as well as white domino masks.

They each carry a small number of power-imbued items, which are featured below.

Curse herself usually carries a small first-aid kit, a phone or two, a taser, some pepper spray, and some misc stuff to keep her entertained (Nintendo switch, rubix cube, some art supplies/notepads)

Curse is an savant, Art is her lifeblood.

Sketching, painting, drawing, sculpting, nearly all her energy has gone into honing herself to be excellent at as many art-forms as she could. Always naturally gifted, practice really does make perfect.

Its doubtful that she'd be as famous without her powers, but she'd have still been an artist of some renown, together she is elevated to new heights.

Her power has helped somewhat with her artistic endeavors, helping her learn quicker, a steadier hand, better memory, to ensure its host can make the best of materials for it to imbue with various effects.

She has some basic first aid skill, though her only combat skills are what she remembers from junior high from Karate class (IE, not much)

Curse's mentality is deeply effected by the extended abuse and gaslighting by a pair of masters that lead up to her trigger, and her brain works a little different. Feeling the full range of emotions, but her outward reactions being unnaturally subdued.

She gives off a sleepy disinterested vibe, but is rarely giving anything less than her full attention.

A bit of a savant, Art is the most important thing to Curse. The expression of ideas and emotions, in new and interesting ways. This drive along with her superb skills and her uniquely suited powers have allowed her to accrue the kind of clout to appear on prime-time TV on more than one occaision.

This process takes a long time, anywhere from 9 hours to 10 days on average. The 'strength' of the effect is not what effects the length, rather the complexity. Tweaking existing effects can take shorter periods, depending on complexity and strength.

Once an object is imbued the object is permanently imbued, whereas the effect on people interacting with the object can potentially be quite long lasting, although the effects are themself non-permanent.

Curse themselves are immune to the effects of their art, being able to toggle on-and-off this immunity to experience it as others would. Although she does not realize it, her power has enhanced her skill as an artist: helping her learn quicker, a steadier hand, better memory, to ensure its host can make the best of materials for it to imbue with various effects.

I'd prefer to leave the full variety of effects possible as vague as possible to allow room to experiment, I suspect this shouldn't be a problem since the objects are to be approved as equipment posts.

But I'll Include a number of examples in the comments

(like starting tech for a tinker, though some of these examples are not available, having been leased or purchased by collectors and museums, their inclusion should give a better idea of what she can do.)

Ginger has always been decent in her studies, but it was in her electives that she learned Art was how she wanted to live her life.

It took some work, but she'd managed to get accepted to one of the most prestigious Art schools, and the first two years went amazing!

She'd learned so much, she'd improved in her skills, and had made friends. It wasn't until after the fact that she realized things went down hill when she moved in with her two roommates.

Her mental health deteriorated sharply, her studies falling behind, her creativity failing her. After a year of suffering she received diagnosis from a slew of doctors.

Thats what it appeared to be at least. The despair she felt was difficult for her to put into words.

Things came to a head however. A woman pulled her aside after her classes. A private detective, a thinker, she didn't consider herself a cape, she didn't do the glamor of a costume or cape name.

She explained things, she'd been working on a long term case. A pair of criminals, they didn't like the spotlight either, but the PRT had names for them regardless. 'Pavlov' and 'Gaslight'... Their MO was to break people, slow and steady. They'd narrowed them down to this college because of the unusually high rates of suicide and self harm.

It made sense.. they were her roommates.

Her world came crashing down around her at this point. things made sense, she'd gone down hill shortly after moving in with them, those devils had driven her nearly to the point of ending her own life, and what? it was just some game to them?

Things were a blur past that point, the fact that she'd triggered had been more than enough for the Detective to confirm her suspicions, and call the PRT to deal with the villains.

The LA protectorate doing a fine job of catching them, they were powerful masters, but they worked incrementally, not all at once.

In the Aftermath, Ginger sought help with support groups for Master victims, Ironic given her new powers, but they helped.

It took some time, but she found her place in life. Free from what had kept her from her full potential, she excelled in her studies. Quickly rising into the spotlight for her 'unique' parahuman powered art exhibits. Things weren't easy, but she was happy.