A reputable mercenary in villainous circles, known to prefer jobs guaranteed to involve fighting other capes. Generally known to be professional. Known to have recently relocated to Devilfish. 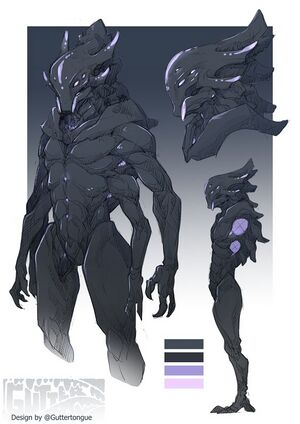 Civ: Standing at 5’8”, she looks generally average, if maybe a bit more in shape than usual. As seen in the image at the top of the page.

Costume: Usually consists of cheap and easily disposable clothing (tank tops, sweatpants, no shoes). The one consistent element is a belt with pouches and loops for her equipment and a domino mask decorated with stylized additional eyes.

Cape: Varies greatly depending on the situation. (changer)

Cruach is inherently distrustful of her own impressions and perceptions, doubting herself heavily. Her power seems to whisper to her, edging her towards violence, infecting others, and fighting capes in particular. It also provides a low background of sensory data and interpretations of the surroundings, in a rather hard to parse format. Adeline has latched on to the “voice” of her power, seeing it as an alternative to her own questionable impressions, and as such has grown to trust it. Her power, and the changes it has brought to her physiology and mentality, have alleviated some of the symptoms of her schizophrenia and exacerbated others; she periodically experiences minor to severe visual and tactile hallucinations, though her ability to focus and form relationships with people has improved. She is also significantly more paranoid and generally distrustful than the norm.

TL;DR: Relatively free changer through medium of minions inside her, which she can spread around, make weapons from, and infect people with.

The viscera of Cruach’s body contains a multitude of alien tendrils, eyes, and small creatures which somewhat resemble bugs. Cruach has total control of these Creatures, and can use them to alter her form, applying single small to moderate sized changes (shifting the placement of organs, growing a singular new organ or orifice) with a round of focus, or two rounds while performing other actions; larger changes (growing a new limb, growing a new system of organs, full body cosmetic changes) can be made with one to five minutes of focus depending on the complexity/size. She has no issue moving effectively and adapting to new body plans. She has a maximum weight of 400lbs and a minimum weight of 60lbs. Assuming a non-monstrous form, such as imitating an animal, other than her standard human one leaves traces of her true nature, small bits of minions poking from orifices, small monstrous features, etc. She may not imitate specific creatures or people, but may take on a generalized form (she couldn’t imitate your dog, but she could immediate a dog).

Cruach may draw the Creatures out of her viscera to the surface of her skin, where she may form them into simple melee weapons and shields, coat parts of her body, or deposit them on a surface. Formed weapons last two rounds if disarmed, before falling apart as the Creatures starve and die. Deposits of creatures on surfaces last about 20 minutes. Cruach maintains control and continues to receive sensory feedback from deposited creatures. The creatures that resemble bugs poses flight when outside the body. Control extends 100 meters from Cruach's main body, outside of this range Creatures will seek to preserve their own lives and re-enter the range of control, but are not otherwise hostile, and will still die in the allotted timeframe. The Creatures seek to keep her body in peak working order, and so will knit damaged flesh back together, set and repair bones, and perform other beneficial maintenance given time and resources. Adeline must eat at least twice the amount a normal person would, but regenerates small wounds (cuts, burns, bruises) in seconds and larger wounds (broken bones, internal bleeding, etc) within minutes. Regenerated areas initially appear somewhat monstrous, with general aesthetics in response to the damage received, and take a minute of focus after being regenerated to return to looking human. The loss of a limb or entire organ requires a full night's rest and eating at least enough raw mass to replace the lost part. In the even of the loss of an essential organ or organ system, the creatures will do their best to take up its function until it can be regenerated, this puts serious strain on Cruach, making bringing the creatures out in order to form weapons take a full round, and knocking her unconscious in the event that more than one essential part is removed or critically damaged.

Upon introducing the Creatures present in her viscera into another living thing, usually through striking them with a formed weapon (though it can be done orally if they are willing or incapacitated (taking them to stage 3 in the case of incapacitation)) the creatures begin to take root, growing and expanding throughout the person’s system. The person may take a round to rip the creatures out from the point of introduction. Effects of this process on those considered enemies are detailed in the table below. If an infected individual is rendered unconscious, Creatures will halt their consumption; taking the person back to Stage 2.

Alternatively, willingly accepting the creatures into oneself while Cruach considers you an ally will confer to you either slight regenerative abilities (closer to just holding things together and inside than true regeneration (you won't bleed out from cuts, and broken bones will set and splint automatically, but you'll still need medical attention after the fight)) or the ability to form weapons in a similar manner to her (though they cannot spread Infection) for the duration of a given fight, after which the creatures die and are harmlessly metabolized and expelled. Should she switch to considering you a foe while you have the creatures within you in this way, you will immediately suffer stage 3 infection.

Cruach may take two rounds to force the creatures to rapidly repair another person if they are injured/incapacitated. This method of healing leaves the healed area with some permanent monstrous/alien feature (ex: healing a cut may result in scales, raised blackened veins, or entirely transparent skin in the area. Healing an eye may result in oddly colored sclera or irises, strangely shaped pupils, etc).

Adeline was popular, from the beginning she had made friends easily, and as she grew she fell in with the “popular” crowd, student council, parties, sports; she fit in, she was liked, and on top of that she never let her studies slip. As she hit senior year, she began to withdraw a bit, but she told herself it was just the stress from the coming change of college, her continued studies, and the demands of keeping up her image. Things continued to get worse, and her grades began to dip near the end of the year. She’d lost friends, failed to keep up relationships, her home life was growing steadily worse as her parents put pressure on to continue to perform as she had been. She thought that finally getting away from it all, the fresh start of college, would solve everything. Oh how wrong she was. She found it hard, bordering impossible, to connect with people as the year started; she couldn’t muster the will to study properly, it was looking to be a repeat of her last year, only this time she didn’t have her previous reputation to ride on. She withdrew further into herself and the internet, looking for answers. There had to be an explanation, she was sure of it. She researched, not sure what the actual problem was, she looked for more generalized solutions, and eventually found a cape who claimed to be able to heal or at least diagnose just about anything. She was suspicious, but lacking basically any other option, decided to go through with getting in contact with them. They were a tinker, and as she was undergoing the scans and tests that they claimed were needed, the heroes arrived. She would later learn that the tinker had made a habit of taking apart those they couldn’t cure, both to study further and to use as parts for their tech. As the battle raged she was caught in the middle of it, triggering in pain and confusion, and running away once she awoke, capitalizing on the unconsciousness brought on by her trigger in the other capes. As the years passed and the symptoms of her schizophrenia changed and became more apparent, she came to rely on the insights and whispers of her power as a guide, a path which led her to her current position as a traveling mercenary/villain.