As her ‘public’ debut, she was seen making off with a diesel locomotive and three detached box cars and one flatcar worth of materials, roughly split evenly between steel, and wood, and copper, as well as a single tank car full of diesel. The small train made its way west out of devilfish’s stockyard and disappeared down the track.

It is an open secret to the higher up rail union workers in the Devilfish area exactly who C.C. is, however she is also family to most of them. There are more than a few daughters named after her. So when the train crews are asked to describe what exactly happened to their trains, the rails, their shipments, or where C.C. went, they tend to be less than helpful, and if she ever needs a few extra hands for high paying jobs she knows where to look.

Priscilla owns, now that she paid off the mortgage, a nice sized family home she inherited from her parents. Due to her career, she ‘owns’ (read: is paying off the bank's loan for) a very small repair shop, turntable, and shuntyard. It has enough room for one locomotive in the shop and three short shunting lines for carriages that are to be repaired. Connects directly to BNSF Line and is located Directly South of Devil Track and just East of 435.

An electric battery has been added, capable of pulling a small train of a few cars for an hour before dying. This is an absolute emergency last option.

The crane and workshop takes up 30 feet of the 89 foot flat car, leaving only 59 feet of freet cargo space. 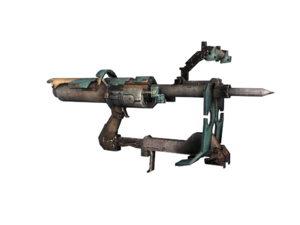 She is also capable of using special bolts that carry an electric charge, originally meant to weld the spike to the rail, but also capable of being used as an aoe shock weapon. When used in this way it creates a five foot circle of charge that shocks those within at near taser levels.

Finally, it is also capable of protruding the spike without launching it, similar to how a jackhammer head moves, able to be used as an improvised fist weapon. Capable of breaking a 7 inch thick rail tie with a few swings. This damages the spike beyond the ability to fire and she must manually reload after doing so.

Seeing as there is no reason to make every single carriage CC uses into tinkertech (I.E. A box car with metal welded onto the outside isn't tinkertech, its a retrofitted boxcar), here is a section where I specify what mundane cars she has, modifications to them, as well as equipment kept within them. This list will expand with her aquiring more carriages or vehicles for her work.

The barracks, #10501001, is not meant for long term living, but better than nothing, and allows goons to stay close if she ever hired any.

The one for storage, #10701001, is currently equipped with a crate of molotovs, beyonets, batons, and a single bolt action rifle, as well as a heavy vault inset into the wall on one side, capable of carrying a few wooden crates of supplies.

Priscilla is a jovial, caring, hard-working soul. She cares about the poor and working class. She tells awful puns and cracks jokes almost nonstop. This joviality, however, stops when she sees abuse, especially abuse by those who have the funds and ability to make changes. Would happily throw a brick through a billionaire’s empty skull. She sees the rail workers in the Devilfish area as family and would happily die, or kill, for them.

C.C. is a Tinker focused on building, upgrading, and maintaining any vehicle that could be considered a train or be necessary to the function of a train.

She is also able to produce a few tools that allow her to work on tains or rail lines, but these are fairly limited in nature. Tools like rail spike launchers, basic exosuits for moving heavy parts, etc.

As examples of what she can create, below are a few ideas that are possible

Pricilla is a rail rat. Always has been. Her father was an engineer, her mother a signalman, and her family has worked for the railroads for generations. She had always been fascinated by the heavy machinery, the logistics of it all, how everything fits together. At the age of 16, with her parent’s help, she opened up her own repair garage near Devilfish where she would work under her father’s tutelage learning how to fix up trains.

After her parents' deaths, she was thankfully self-sustaining. Sadly, as she is technically a business owner, she is not able to hold a union card, but over time, she grows to be a respected figure to the union presence in the Devilfish area due to her familial connections to the rest of the RWU. At the age of 23 the BNSF company announces that they are going to be raising hours, while getting rid of many benefits. The Union immediately gets upset about this and talks start immediately. Priscilla is one of the non-union members to be pushing back on this, fighting doggedly for the workers, and the memories of her parents, to be respected.

Priscilla fights and struggles for years, losing business from BNSF in the process, trying her best to make the company see reason. She starts to get threats of foreclosure on her business. She’s forever blackbooked to the rail companies. Yet she puts her everything into this fight. She feels it’s worth it. The rail workers rally around her, seeing the sacrifices she’s making, seeing how she hits her head against a brick wall over and over, looking for a way to make people see reason. At the age of 26 escalations eventually lead to threats of strikes turning to mobilization…all with Priscilla being one of the loudest voices in the crowd, standing arm in arm with her fellow workers. The Federal courts rule that their strike is illegal. BNSF starts hiring scabs. Pinkertons start to be seen in Devilfish Minnesota. Despite all this, Priscilla keeps to the front of the Picket, ready to fight tooth and nail for what she wants.

All of her work proves for naught. When the Pinkertons arrive in town rumors suddenly start to spread about her family. The courts start investigating her and charges are laid against her for inciting unrest. At the start the union supports her, cries out for a mistrial, and tries to help. But as time goes on, public opinion shifts, the court rules against her, and so the union, despite their love for her and the closeness she has with the rail workers, asks her to stop striking with them for fear of public backlash. Without her, the union finally folds, and everything she sacrificed for nothing.

Broke, a mountain of problems she can’t fix, and the memory of her family to the wider public in shambles, she finally breaks.