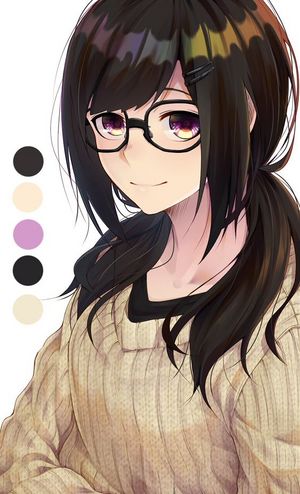 At a glance, Amelia is a relatively small young woman with a shy posture about her, standing around 5' 5" with a light frame. She has rimless glasses and neat, straight black hair that's usually kept tied back, or straight to frame her hazel eyes. Tends to strike people as the type to hang out in libraries or coffee shops.

Callow's costume is a slightly frilly renaissance-fair plague doctor costume, retailored to be more practical (Read: less poofy, tons of pockets) and the shoes replaced with soft-soled ones to make her footsteps quieter. In addition, she's added a balaclava beneath her mask and taken to wearing black dress gloves in order to completely conceal her features.

Despite modifications, it's really just a costume, and doesn't provide much physical protection.

Destroyed, Decommissioned, or Given to Others:

Amelia is, on the surface, a very intelligent and relatively nice girl. Her awkwardness around people and her penchants for overworking herself or self-depreciation can be easily passed off as quirks of her personality. The reality, though, is that she's struggled with mental issues for much of her life, pathological obsession and trouble reading social cues chief among them. These problems have been exacerbated by her shard post-trigger, and are a major source of insecurity.

Her foremost goals are understanding her power—she came to Devilfish because of how many tinkers there are—and distancing her prior life from herself, to the detriment of everything else.

Normally, a tinker has some sort of inkling or intuition about the sorts of things that they are capable of building. Maybe they know this inherently, maybe the inspirations that begin to flood their mind have a coherent through-line, or maybe they even have a secondary power that their tinker power is intrinsically connected to.

Callow is unorthodox in that she entirely lacks this luxury. She builds more like a free tinker would—providing ideas to her shard, which then provides a method to achieve it. Unlike a free tinker, however, Callow does have a specialty, and a strong one at that. The catch is that she has absolutely no clue what that specialty is, and the farther the tech she builds is from it, the more likely it is to catastrophically malfunction, leaving her to piece together what her power truly is.

Generally speaking, the more thematically, ideologically, or mechanically removed a specific piece of tech is from her specialty, the more severe unintended drawbacks or malfunctions it has. Maybe they only work in some circumstance, or with some cost, or have some (more related) parts work better than others, etc. Things that are entirely unconnected tend not to function in the first place, or immediately, disastrously break. Some of these might be known, or others may not show themselves until the worst possible moment.

Meta: I, Spectralknight94 (The Player), have no clue what Callow's specialty is. Instead, any prospective piece of tinkertech will be presented to a group on the discord that represents the shard and knows the specialty, before figuring out how well/if it works and giving it back to me, similar to Magnum Opus.

Note: Massive thanks to /u/Magos_Nashoid, /u/Shellmerc, and /u/unknownmercury for running this for me. Wouldn't be possible without y'all.

They were amazing. Charismatic, intelligent, popular, nice. You loved everything about them.

You didn't- it wasn't like you wanted to hurt them or anything. That made it better, right? You just wanted to see them, to know about them, and make sure they were okay. Still, you felt guilty; you knew what you were doing wasn't good, wasn't healthy. It ate away at you for a long time. You had doubts, second thoughts, but... you didn't want to stop. They didn't have to know, right? You wouldn't go any farther. It would just be your secret.

It turns out that they didn't, at least, not until you came to them and apologized for everything.

Word got out, they told everyone. Your school, your parents, the police. Most of your family stopped speaking to you, your scholarship was suspended. Your life was ruined, and they hated you now.

It was then when it dawned on you—or rather, collapsed on you. It was all your fault. Everyone could have been happy if you just kept your fucking mouth shut. You ruined everything.