Bulwark is one of the core members of the Burnouts, notable for taking part in expansion of Burnout territory against some of the smaller street gangs, as well as being the key behind the construction of the Barricade Walls around the Ruby District, during the plague. a number of the Burnouts run-of-the-mill gangsters are equipped with weapons, and occasionally armour made from the stone-like material Bulwark generates with her power.

She's been in several cape fights, most notably a victory against Misfit and Permafrost of the Wards.

Was recently involved in a fight with The Protectorate Tinker Ammonite, after bulldozing a shop at the edge of Burnout Territory, managed to force the Tinker to retreat. 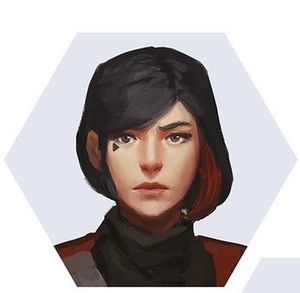 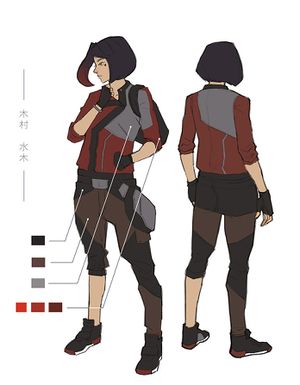 Morgana has often been described as beautiful. She stands at 5’9” in height, and weighs about 190 pounds, and is in possession of a remarkably curvy figure. She has somewhat short black hair, and a dyed red streak on one side, and a small tattoo under one eye shaped like a triangle.

When in her guise as Bulwark, Morgana wears a rather fashionable costume, consisting of faux-metal armour plates, inter-meshed with hand-sewn leather. The only pieces of genuine armour in her costume are the steel helmet, steel gauntlets, and the rent-a-cop level stab-vest she wears under her costume.

When actively using her primary power she creates a large bulky suit of parahuman meta-material armour, that she wraps herself in. This material resembles stone of some kind, and can increase her bulk significantly, increasing her height to a maximum of about 9 feet, weighing multiple tons

Bulwarks Costume (Without her Feystone Armour)

Morgana has a Masters Degree in Fashion Design. Morgana works as a senior-costume designer (and assistant set designer) at the Grove Theater. She drives a well-maintained Minivan.

Morgana is generally a pleasant individual, but those who have made themselves her enemy can attest that Morgana Cromwell has a sadistic streak. She has been known to on occasion verbally abuse people who have crossed her to the point of tears.

She has mixed feelings on her family, she resented her father, and had mixed feelings about her step mother Candice. She had a few decent memories of her older brother Alexander, She was exceedingly close with her twin Elaine, who she considered her best friend. She had somewhat protective feelings for her younger siblings, Blake and Mina.

Even with her Feystone’s reduced weight (at least compared to mundane concrete) it is still hefty enough that when wearing her armour she is on the slow side as far as brutes are concerned.

Morgana can project a small snow-white forcefield from her wrist (or the wrist of her suit) that resembles a snow-white, slightly illuminated 12 inch buckler shield The shield is seemingly nigh-unbreakable, but otherwise acts like a simple flat piece of metal about the size of a dinner plate 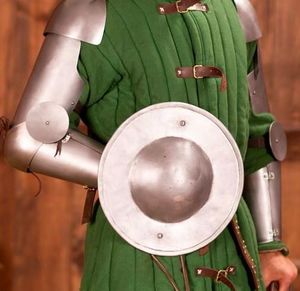 size of the buckler

Morgana possesses a simple thinker power that allows her a bit of insight into a building or vehicles structural limits and weaknesses. This doesn’t provide in-depth detail, but gives her a decent idea of where and how hard to hit a building/vehicle to damage it the most.

Physical contact with her Feystone grants her mind a slight resistance to direct emotional alteration (of both the chemical and Shard varieties) This usually manifests in a dulling of the effect (typically at about half the potency), or in the case of something that cannot be dulled, a lessening of the effects duration.

This resistance can be nullified completely if exposed to more than one source of emotion alteration at a time.

Disclaimer: Powers are often confusing, and I figure that the exact details of resistance can be determined on a case by case, power by power basis (determined by what seems reasonable to; myself, the other player, and maybe a staff member if we need a final decision or a tiebreaker.)

When Morgana’s armour has reached a maximum size (5 cubic meters of material) she can continue to convert material into Feystone, but only in the form of bladed weaponry, due to the complications of wielding a shorter blade with such a bulky suit, she prefers to create long Polearms (Spears, Halberds, Glaives, Scyths, pikes, javelins)

Her blades are only about as sharp as a normal sharp steel equivalent.

Morgana can also make simple preconverted Bricks of Feystone, which allows her to quickly shape armour or weapons, without having to tear up the surroundings to use as raw materials.

Morgana can (upon touch) convert her surroundings (Dirt/Concrete/Asphalt/Metal/etc) into a unique Metamaterial (henceforth known as Feystone) she can convert the matter at the rate of 1 cubic meter of material every 5 minutes. (with a maximum of 5 cubic meters

usable for her armour at any one time)

The Feystone is about as strong as concrete, but with half the weight of mundane concrete, and possess several odd qualities, it is unnaturally buoyant, floating to the surface of any body of water when submerged, another odd effect is that in low light conditions it is softly iridescent (akin to an oil slick), the material is exceptionally smooth, and has been described as pleasant to the touch.

Morgana can shape the Feystone into a bulky and somewhat slow suit of armour , capable of giving it as much (or as little) cosmetic detail to its design as she wishes. approx Size(maybe a little bigger?)

When inside her suit of Feystone armour, she can leverage the suits bulk to knock down walls, or flip cars, Her suit is strong when using its weight and size, but is not especially gifted at lifting. Her maximum movement speed lowers drastically when her suit grows in size. 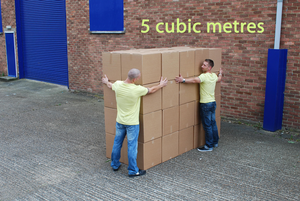 example of how big 5 cubic meters 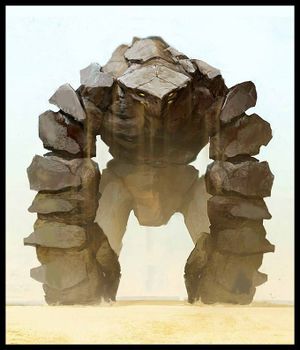