Bonnie and Clyde, a duo of supervillains known for a short-lived but highly successful crime spree, having robbed a Dozen Banks before disappearing from the cape scene entirely.

Bonnie and Clyde are both Changer/Tinkers, although their exact specialties are are unknown. Bonnie possesses a rather massive brutish changer form, while Clyde has a strange semi-transparent gel-like form, that is resistant to damage.

They are known for bantering with those who attempted to stop them, and avoided using excessive force, although property damage was high at several of their heists.They have recently re-surfaced in the city of Devilfish. 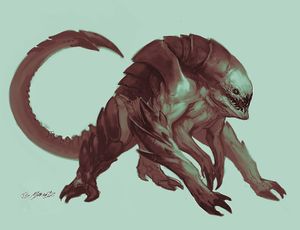 Out of costume, Bonnie is a sturdy denim clad trans woman about 5’7” in height, with shaved auburn hair. She has a black beanie hat that she wears quite frequently.

In costume, Bonnie dresses as a variation on the archetypal 1920s gangster, with trousers, dress shirt, and suspenders contrasted with a sturdy set of work boots, bandana, and dieselpunk welding goggles. She wears a white wig.

As a changer, Bonnie is a grey and brown dinosaur sized monster wearing a harness of sturdy yellow, iron, and black tinkertech. Four arms, two small ones and two larger ones that serve as legs when walking around. A long tail for balance.

Wealth Level: 6 (Technically 7, but its a 2-tinker household, so functionally wealth level 6) Bishop Knight (Clyde) and Bonnie Baker (Bonnie) are Life-partners, and do their finances as a single unit.

Bishop Knight is an endocrinologist, and internal medicine physician, operating out of a local clinic, and taking referrals from many of the local hospitals and family doctors in the Devilfish area. As they are one of the few endocrinologists in the local area, they make good money. Bishop Knight owns a 2016 MINI Cooper, and Bonnie Baker owns a Ford pickup truck. It is not uncommon for them to use the other’s vehicle.

Together they also own a pull-trailor that they can pull with Bonnie's Truck, from their old crime-spree days, that they keep in good repairs, to lug around Bonnie's big old changer form, and her bulky equipment. The Knight-Baker household is a small farmstead outside Devilfish, where Bonnie keeps goats, chickens, and a decently sized vegetable garden to sell at the local farmers market..

Bonnie is, as a former Hutterite, trained in farm labour and home maintenance. She’s since supplemented these with a job as a mechanic. Confident driver on roads. Competent at roller blading for exercise. Awful at video games, but keeps trying shooters for inspiration for tinkering.

Bonnie is also an amateur at tenpin bowling, and a functional cook for anything that can be cooked by shoving all the ingredients in one pan. (Stir fries and curries whenever it's her turn to cook!)

Bonnie is a tinker and a changer.

CHANGER: Bonnie is capable of spending a minute to shift in or out of a large armoured changer-form. This form stands at 3 meters in height, and weighs in at 2.5 metric tonnes. This form switches between walking on its arms and legs like a gorilla, or balancing on its hind legs like a Pangolin when interacting with objects. This form possesses a large tail that helps with balancing its unwieldy form. A small secondary set of arms are located on its chest, which possess much finer motor control. Any Injuries inflicted upon this changer-form will carry over in a roughly 1:1 manner when she’s shrunk back into human form (With exceptions to this being the changer-forms secondary arms, and tail, as it has no equivalent biology, and will actually grow back if severed, when changing forms)

The changer form possesses an incredibly resilient, robust, and adaptive nervous system, that allows much greater ease when interfacing with any kind of biological-to-technological interface. This changer-form is strong enough to lift and carry at most 2 metric tonnes in weight. This form can sprint at a speed of roughly 12 kilometers per hour, but generally moves at a more sedate 4 kilometers per hour. This changer form can only jump about a foot upwards.

Despite its inhuman outward appearance, its internal biology is roughly human. This form is no more durable than a large African elephant (while its skin will be somewhat resistant to cutting or stabbing, due to simple thickness) ~ The only major exception is its armored carapace (located on the elbows, knees, back, and forehead of the form, which is about as tough as a half an inch of steel plate.

Bonnie is capable of speech in her changer form, although it comes out a bit gargled, and unusually deep in cadence.

TINKER: Bonnie is able to build and maintain advanced technology, provided doesn’t stray outside a few boundaries. Big, Plugged In, and Repression.

Big: - Bonnie’s tech is all scaled up to be used by her large and terrible changer form. These devices would be comically large in the hands of a normal human and heavy to the point that one would need to be a brute to wield them.

Plugged In: - While another tinker could build a more mundane and simplified interface, most of the designs provided by her power default to using a variety of biological-to-technological interfaces, whether it be firing mechanisms connected to a nerve-spike that jabs into an arm, or her shoulder mounted field projector being controlled by an electrode studded helmet worn atop her monstrous head.

Repression: Bonnie’s tech is themed around the concept of “Repression.” This manifests through energy field projectors that “dampens”or restricts things like sight, sound, friction, gravity, etc.