Bloodhail is a known nomadic villain in the state of Minnesota and sometimes Canada. She is a drug dealer and a plug first, and then a cape. Bloodhail has rarely been involved in any serious fights. Usually ousted from cities by either heroes tired of her selling drugs or by villains with the monopoly over the market, Bloodhail is constantly at her feet. Both heroes and socially conscious villains have been alerted of her presence after running away in her breaker state from a police officer.

UPDATE: After a week of chaos causing, she seemed to have settled down after founding a team with another f-lister. 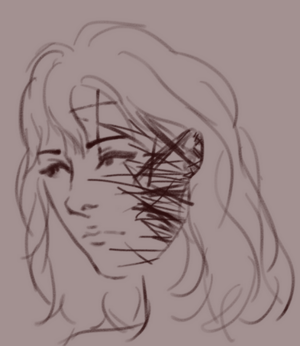 Mercy is a casual woman. She never puts too much effort in her appearance, but she does like to cover up her body. She is a bulky woman, weighing 170 pounds at 5’8”. She has dirty blonde hair that reaches just above her shoulders. She has a round face, slightly tanned skin and brown eyes.

Recently, Mercy has taken the habit of tattooing herself. Mercy’s forearms are tattooed with abstract, black symbols. The left side of her face is now also tattooed.

She wears her general street clothes whenever wearing her ‘costume’. Her mask is a white faceless mask with two vertical slits for the eyes. She usually wears black and darker clothes.

Mercy is a lazy gal. Before her trigger event, she would try to smooch out money from her relatives and friends as a way to fund her various desires. When she wasn’t able to take money from other people, she resorted to drug dealing and other minor crimes. As a dealer, she was a friendly but quiet man who did the job. She earned himself a reputation within the underworld as an efficient man who did the job.

After being arrested for charges of petty larceny, Mercy triggered. Her life wasn’t quite changed, however. She was still the same lazy gal who didn’t want to do anything too tiring. However, since she had made her escape through the police station with her power and left a human-shaped hole in the wall, Mercy was now on the lam. She prefers hit and run tactics where she grabs the loot and runs away through the walls.

Ever since her trigger, she has gained a compulsive need to touch, hug and enter contact with people.

Bloodhail enters a strobe-like breaker state, resembling a photo negative of a person with blurred details. In this form, the cape emits a constant strobing pulse of black light and bass noise, both visible/audible at a distance of 15’ or less.

While in this state, the cape is able to absorb any inorganic matter they come in contact with at a touch, and can travel through solid matter, absorbing that matter in the process. The process is Manton-limited and does not affect costumes, piercings, etc. Any matter consumed this way becomes replaced by a strobe-like negative of itself, producing the same pulse of light and sound as the cape’s breaker state at a distance of 5’. This negative image lasts for one minute upon creation, after which it disappears.

If she enters in contact with someone while in her breaker form, the person will become entranced with her image as if hypnotized. Their thought process is slowed down and it becomes harder to attack Bloodhail. The effect is removed as soon as Bloodhail exits her breaker form, or when the victim is out her line of sight.

Bloodhail can only stay at best a couple of minutes in her breaker form. After exiting her form, she is hungover and will often feel sickly and dizzy as if she’s coming off drugs. Bloodhail can be damaged out of her form, and doing so to her will knock her unconscious, and make her incredibly sick.

Bloodhail enjoys being in a breaker state, and wants to inflict the same pleasure on people as she feels in the breaker state, actively trying to use the power on as many people as possible. She also needs to regularly enter their breaker state otherwise they risk destroying objects around them in inopportune moments.

While in her breaker state, she is incapable of speech.

An Ontario native, Mercy Tremblay’s life was always the same: mediocre. She never did any efforts in school, or work, or anything for that matter. She did the bare minimum to get by and smooched off his parents. As she grew older, Mercy turned to petty crimes as an easy way to make money. She enjoyed living the luxurious lifestyle without working for it.

However, after her third arrest for shoplifting, her parents kicked out at the age of 17. Mercy dropped out of high school and started squatting in friends’ houses. She upgraded from larceny to drug dealing as a way to fund her life. Even if she dabbled in the universe of drugs, she never quite experimented with them other than with weed and opiates. She would have probably continued on this path if it weren’t for her fourth arrest.

The cops took her into the interrogation room, handcuffed you to the table, and then… they essentially forgot about her. At first, she had thought it was some psychological trick, to make her talk more whenever they’d come back. But after falling asleep and waking up, her mouth was now dry from thirst and her head was dizzy from hunger. There's no real sense of time there: they had taken her (stolen) watch, and there was no clock. She screamed, desperately hoping for help... but stopped after realizing the walls were soundproofed. After spending another day chained to the table, weak from hunger and delirious from thirst, the realization that she could legitimately die here finally truly sunk in, and she triggered.

After her trigger, Mercy left her hometown of London to cross the border to America for greener pastures. She traveled around Minnesota and the border of Ontario whilst making a name for herself for robberies, drug dealing and other petty crimes. After a while, Mercy settled into the city of Devilfish in an effort to avoid the troubles of her past, and possibly starting new ones.

I'm so sick and tired (but can you make it better?) (Mercy, Alice/The Galacterian Knight, Ardha)

The Lone Child of the Taiga (Bloodhail, Refraction)

An out of control college party? That rings a bell. (Megathread) (Mercy/Bloodhail, Ardhanavishara)

It's a coincidence that I found myself (Mercy, Aadi) [gayness warning, kissing and pda and shit]