Is a fairly known member of the Hounds for his encounters with the PRT and his killing of a ward. He is a known Tinker/Brute who dons a black suits of armor and over sized weaponry. He is also seen with a dark red robotic horse which has on some PHO threads nicknamed him the Knight of Mars. 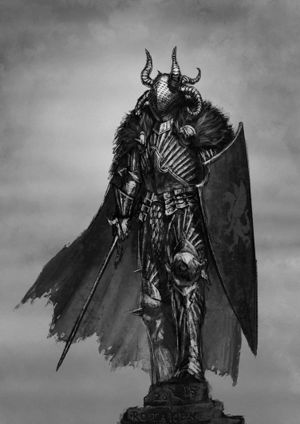 He is African-American and has dark brown eyes that borderline on being black. He has little to no facial hair and his black hair is faded down the sides with a high top. He stands around 5’8” with a muscular build. He has scars along his shoulder and sides from fights. His left arm is covered in scars from previous battles.

Main Suit of Armor for the Blackswords

Enhanced Physical Abilities: Through the use hydraulics and pistons his armor allows him to lift at max levels 2 tons, run constant speed of 25 miles per hour, and jump vertically 5 meters into the air.

-Crossbow: His left gauntlet has a built in automatic repeater crossbow that is capable of firing shots bolts strong enough to lodge them in bone. However, the bolts he uses are dulled so they will slightly pierce flesh or cause major bruising. The speed of its rapid fire is three bolts every second. The gauntlet only can hold 30 bolts at a time.

-Piston Punch: There is pressure plate on his inner right forearm that he can use to prime the the pistons in that arm. This gives him a few seconds to adjust before the pistons will starts to rapidly in out making his gauntlet jab outward and back. His main uses for this function is rapid punches and if tied with his weapons rapid stabs. This can last up to ten seconds but he is capable of canceling it by pressing two pressure plate on his inner palm at the same time. This has a cooldown of a fifteen seconds between each use to allow the pistons to reset and cool.

-Gauntlet Grips: The hands of his gauntlets have small hooks covering the inside of the hands of the gauntlets. This gives him a better grip on gear. Theses hooks can be retracted by pressing a pressure plate on the top of his palms.

-Air Pump: His suit uses pumps to pull and push air in and out of his suit through gas-mask like filters that are positions on the sides next to his ribs.

-Durability: His base durability without taking in consider the special property of the darkness is around that of half a inch of steel. With taking in the special property, the suit is capable of taking a barrage of standard caliber bullets with little to moderate damage. Any attack that could destroy or precise through half a inch of steel with little to moderate effort is a would do decent to major damage to his suit.

-Physical: The suit is physically capable of lifting 300 pounds with relative ease and punch with 800 newtons of force. His speed is up considerably within this allowing him to easily run at top speeds of 40 mph. At max he is capable of vertically leaping ten meters into the air.

-Kamishini no Yari: Attached to the suit through a retractable 5 meter long chain, is a spear crafted spear with a tip that is as sharp as an obsidian scalpel. Due to his craftsmanship and the spear connection with the suit through the chain, the blade holds the edge and is rather durable. The spear also weighs 30 pounds itself.

-Grappling Hook: From the palms of his hand, he can fire out a grappling hook that is 20 meters long that is capable of penetrating concrete.

-Air Pump: His suit uses pumps to pull and push air in and out of his suit through gas-mask like filters that are positions on the sides next to his ribs. This keeps clean air within the suit ,but fails to filter out things like tear gas.

-Upgraded Grips: His hands and feet have small hooks that are retractable and capable of gripping most surfaces. These hooks are strong enough to supporting double his body weight which the suit weights 60 pounds.

-Durability: His suit durability is comparable to that of type II body armor. The suit has built in shocks within the leg area which allows for him to fall from heights without hurting himself.

He is really good at barbecuing and cook up a good burger.

He is a bit reserved because he keeps his emotions restrained. Through, he has grown a little more out of this constant restrain ,at least around those who he trust. To random people he comes off as always having a attitude while to those he is close with he is a bit more talkative and even slightly witty.

Another place that he shows more of his colors is in battle. He loves to fight and test his skills and craftsmanship against others. This love for battle also comes with a bit of guilt that he keeps under wraps. His distaste for heroes is less than what it used to be. He doesn’t respect them ,but he does understand them and their motives.

He is a Templar tinker who specializes in creating power armor melee weapons, and a small assortment of range weapons out of darkness/shadows. His methodology isn’t focus on technological aspect of his tech ,but rather craftsmanship. He can introduce technology into his gear but it's through mechanical systems. The main part of his specialty ,Darkness, can be manipulated into gaining a physical form with a special property. All darkness has a shared existence as on part is apart of a whole. This means the durability stacks as to damage one part, you would need enough force to damage the whole. His darkness is also immune to light based attacks upon it.

When it comes to forging darkness into a physical form it doesn’t have a set texture or state ,so it can be knitted into a fabric or it can be pressed and layer into a form similar to steel. This leads to varying strengths.

His life wasn’t like others as they would make sense when your dad is a gang leader. Until he turned thirteen everything was great, he got whatever he asked for and never had to worry about being picked on because everyone knew his dad. His dad made sure that he didn’t see the true side of what he did. All he knew was his dad was a boss of this company. This all changed when he turned thirteen as he dad saw this time to show him the family business.

This started with his dad showing him a drive by on one of the enemy gangs. Then it turned physical as his father wanted to make sure his son could handle a beaten.

His dad would beat until bloody and would punish him with kicks to the stomach when he was laying on the ground crying. As he grew older theses beatings grew more frequent since he wasn’t as fragile. His dad even would send out some of his trusted gang members to jump him when he was coming home from school ,so he would learn to always be on watch.

Some of theses attacks lead him to hospital and when the doctors would ask what was wrong, his father would lie about what happened.

His dad didn’t see this as abuse but only as training his son to be a man. This became his life and he grew to take each beaten with flinching or showing signs of pain. He learn to hold all his pain and emotions in until it reached its boiling point around his 18 birthday. He knew the time for him to take over the organization was coming and he dreaded every bit of it.

Theses thoughts plagued him during the night keeping him awake.

This is when he heard the sounds of his mother screaming no. He quickly hoped to his feet and winced as the recent bruises that stretched across his body. He walked over to their room in which he heard his mother’s now muffled voice.He slightly opened the door to see a figure above his mother and without thinking he rushed over. His blood was boiling as he couldn’t believe his father would go this low. He wrestled the person to the floor with them landing on top of him.

He caught a fist to the face which broke his nose and that pain is what sent him over the edge. He was caught in flashes of the years of beatens from his father and quickly flipped over so he was on top. His fist went down in a flurry and kept going until he beat the man to death. Then the lights came on and he saw his father by the door with a gun. Trigger.