Ares is a parahuman mercenary, who does not actively attempt to hide her civilian identity. She was there protecting New York when the Endbringer attacked. 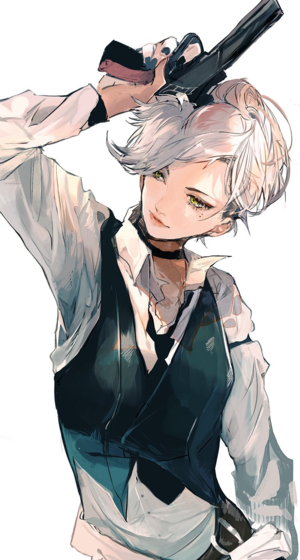 Sky in her Civilian attire

She’s 5’8 and weighs 109 pounds, with short Black hair (dyed white), She wears semi-formal loose fitting clothes when in her civies

She wears a suit of expensive combat armour, its appearance is borderline tinker-tech, but is entirely Mundane in creation. Her armour is rated as Type two on the Ballistic chart.

Sky tends to be rather passive, rarely starting a fight ~ but quick to end them. She tries to avoid excessive collateral damage, as well as undue harm to civilians, this has garnered her a bit of a reputation as a Morally decent, as far as Mercenaries go at least. She is unafraid of fighting publicly and carries her signature weapons with her at all times ~ even when in civilian garb. This tends to draw attention, but she is unbothered by her civilian identity being tied to her cape persona.

In her off time, she enjoys keeping up to date on films (mainly via Netflix), she likes to read science fiction stories and playing games

Sky has a line of sight telekinesis. She can control any number of objects under the weight of 50 kilograms(110lbs), limited to an overall weight of 1000 kilograms(2200lbs). If she controls too many objects for too long of a time she (scaling with weight and amount of objects) she will start to get a headache, then migraine, to the point where she will not be able to focus on all the objects and will no longer be under her control. She can move the objects 40 Kilometres per hour(25 Miles per hour). She can control things outside of her vision as long as she is holding the objects and that they are all connected, such as a chain. She can hold the base of the chain and wrap it around herself even though she cannot see behind herself. This works in the same way you can know where your limbs are in relation to you at all times even when you cannot see them. She can control up to 300 objects at a single time. Once she has control of 300 objects, she has 5 minutes till migraines kick in and she cannot hold focus on the objects. She would have to recover from the migraines before doing anything with her power again. Every 100 additional objects after 300, she has 1 minute less before the migraine kicks in.

Sky was born in Brooklyn, her parents were wealthy folk who ran one of the more popular restaurants in Brooklyn. She lived with them in the upper-class area of Brooklyn until her parents were killed when a number of buildings collapsed triggered by an incredibly destructive cape fight nearby. Sky was one of the people who survived the buildings collapse, she was trapped under the rubble for several days, trapped scared and alone she underwent a Trigger event.

Sky managed to free herself from the wreckage with her newfound abilities. Sky went on to inherit the financial assets of her now-deceased parents, going on to spend a majority of the funds on custom gear for her future antics as a cape. She would go on to act as a morally unaligned Mercenary, she’d go on to make a small name for herself, gaining a reputation as fairly reliable as she tended to generally avoid excessive collateral damage or undue harm to civilians.

In 2018, Sky would make her way back to New Yorke to aid in the defence of her old home against the newest in the line of Endbringers. After the battle concluded, Sky would begin a cross country trip to Ashton Washington, after being impressed with the Ashton Capes who had aided in the Endbringer attack.