One of the many children in the Cromwell family, twin sister of Morgan Cromwell. Known for keeping to herself and almost never being seen in public without another member of the family present.

The cape Archangel would be a relatively little known vigilante, power set isn't totally known beyond a collection of rumors that she can fly, and do something with force-fields. 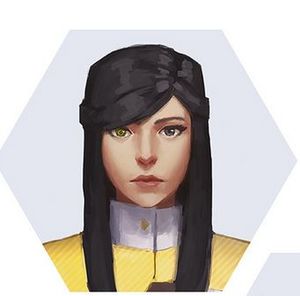 Elaine in her civilian identity

Her face is somewhat rounded with a pronounced chin, framed by her long straight hair. Her somewhat curvy body accented by her above average height of 5'9". Though this is contrasted by her rather muscled appearance.

Her costume consisting of a basic white jacket over a bright yellow tank top, some basic jeans, a pair of 2 inch heels, and a yellow domino mask.

Access to the family manor and a sports car.

She has some training as a nurse from before she got powers, mostly first aid and how to give people their prescriptions properly.

Elaine has always been shy, tending to shy away from conflicts and instead preferring to attempt to keep the peace. Though she's simultaneously always hated her lack of a spine, always wishing she could muster the courage to stand up to someone.

Elaine can mount up a forcefield of golden light onto any point of any object she is currently touching, when making a forcefield she controls where on the object it is made and in what orientation the forcefield will be in. The forcefields are shaped as regular hexagons one eighth of an inch thick and 2 feet wide and acts as though made of titanium, their sides each sharpened into a blade. All forcefields she makes have no weight to them and once made will hover about an inch off of the material they are mounted onto. Once mounted on an object the forcefield and the object act as though a single object (IE: moving one moves the other). Once made the forcefields will not dissipate until broken or they exit her range of a 20 meter radius. She is limited in only being able to make 6 total forcefields, if she attempts to make more than her limit then her previous forcefields will disappear in the order they were made in.

Elaine's body maintains peak physical fitness and health at all times without need for exercise making her immune to all non-power based illnesses, diseases, viruses, parasites, etc.

Elaine has an instinctual knowledge of the physical weaknesses, limitations, and biology of humans. Giving her an insight into how much damage any individual wound would cause.

Elaine can upon focusing on a person, understand how to most quickly anger them. Though her power doesn't give her explicit instructions and instead gives her somewhat vague insight as to where they're most sensitive. (IE: She could look at John Wick and know that if she killed his dog he'd be pissed.)

Elaine can at will attract herself towards any of her forcefields that she can see in direct line of sight. She travels in a straight line until she's in contact with the forcefield and moves at a speed of 5 feet per second. If she attempts to use this power to pull herself towards another forcefield before she reaches the first one the power will not active at all on the second forcefield.

Elaine can reshape her forcefields when touching them, though she cannot change the thickness of the forcefields and the overall volume cannot be increased beyond that of when they were first created, and they always retain a hexagonal shape.

Elaine lived her life in relative luxury, more often than not getting what she wanted when she wanted it the only exceptions being when her siblings wanted something that she had. When her father asked her to live off in America in exchange for a part of his will she was glad to accept it, mostly for the prospect of not having to hide her face when going into town to avoid being mobbed by the press. Though she's always felt that she's lived under the shadow of the rest of her family.

When Elaine got the news that her father had died she was simultaneously saddened and elated. On one hand her father had just died and while distant he had made sure she was taken care of in life, alongside her many brothers and sisters, on the other hand his death meant she would get a portion of his accrued fortune. All of this on top of the news that her father was a cape, a rather well known one at that. Visiting the wake was more of a ceremonial endeavor than much else for her, not as though she knew her father all that well given the time he spent away from her. In fact the only of her siblings that seemed to have garnered her father's attention was her older brother Nathaniel.

During the reading of the will she waited patiently to see how much of her fathers fortune she would gain. And then the news broke that Nathaniel was the only one to receive any of his fortune, and in fact he'd receive it all. The others erupted in anger as she sat there disbelieving the news, then things started being thrown, then one of her siblings used a power. The next thing she knew powers were being used left and right, she wanted the fighting, the chaos, to stop, she wanted it to end and to be left out of it. then she saw something, like a massive flowing mass of nonsensical lines, and before she could make any true sense of what she was looking at the vision was over and there were bright gold panels hovering just off of her arms. when she looked up everyone seemed to have calmed down and she could see that someone had run a sword through Nathaniel's chest. And she knew, just by the glance, that the blade went straight through his heart.