There has already been rumors and small PHO threads circulating around him even though he is relatively new to the Ashton cape scene. This is because of how loud he tends to be and amount of trouble he has been causing. The common detail among each story is the pistol that flares up with a crimson energy he has at his side. It seems he hasn’t shot anyone with it,but that hasn’t stopped him from bragging out all the things it could do. 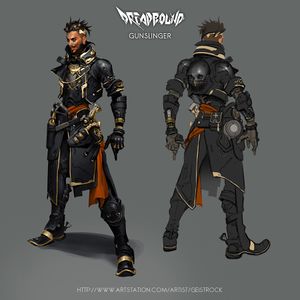 His costume is design after this ,but rather with red replacing the gold portions of the suit.

His shoulder length almond brown hair is slightly curled at the tips. He takes good care of his hair making it quite fluffy. His eyes are a marble grey with light ring of gold near his pupil. Wade’s face is clean shaved almost always and his ears are pierced with ruby colored earrings. He has a lean build due to being on the swim team when he was in private school. His clothing varies quite often but the common theme he keeps is hypebeast apparel and his red wine Adidas Yeezy Boost 350V2 Real Boost.

His mask is red with sharp teeth smiling and only covers the lower half of his face. He has his hair tied back into a bun with a red band holding it there.

Wade is generally laid back and nonchalant about most things. He usually handles his problems by throwing money at it to avoid with personally dealing with them. This changes when he is out in his costume since he lets his inner thrill seeker loose upon the world. As Raze, he is dramatic and over the top about things for the sake of the attention he gets. He isn’t the one to take things seriously at least not at first. If a situation push him to be serious, he is likely to leave or handle it like a cutthroat. He is also a vindictive person who will seek to ruin someone if they badly ruin his fun.

He is fairly wealthy due to a inheritance he gained through the death of his grandfather on his mother’s side. He has a trust fund of 500K that pays for his his living expenses like his wardrobe filled with all the clothing he could want, a nice two story house in Mayview Suburbs, and a black Tesla Model S. Through this fund, he collects 3% interest which gives him 15 grand every 6 months. Through his spending on his gear, he has 10 grand on hand at the moment.

He has a few contacts that being his family’s lawyer ,and a connection to the people who were able to get him in contact with Coven.

Wade is a Striker with a Thinker power. His Striker ability allows him to enchant ranged weapons of any type with a devouring effect ,and use the materials that are consumed to make ammunition. His Thinker gives him perfect aim on the materials he has consumed.

His power manifest as a red wisp like energy that coats the weapon the power is being used upon and the same energy manifests when the projectile hits something. This enchanting is touch based ,but not based around his hands. The weapon just need to be in direct contact with his body. This effect doesn’t have a time limit ,but will go away once the weapon runs out of ammunition. The devouring occurs at a rate of 1 square cubic in. every two seconds for eight seconds. The spread is roughly spherical. It consumes everything at the same rate regardless of material or durability ,and stores them within a pocket space to be used in the second portion of the power.

His power allows for him to use consumed materials to craft any type of ammunition for any weapon that is in contact with him. So if he gets his hands on a tinker tech rifle, he is capable of creating ammunition for it as long as he has the materials to do so. This process is just about instant and will spawn within hand.

He can devour materials within his storage world to fuel and direct his thinker ability. The ability allows him to have perfect aim but only when aiming at material he has consumed. To trigger this ability he must consume six cubic inches of the material ,however; this ability only lasts for one shot and will require another six cubic inches to use again.

Side Details: When it comes to the more exotic types of ammunition like water bullets and things that would normally just fall apart, his power holds them together until they have impacted a object after being launched or fired. Once those condition have been meet, normal physics will resume to work upon the object. Another detail on the ammunition portion of his power is how much is material is used to craft. The base that is used is a standard clip for a 9mm handgun as that will consume 1 square cubic in. of material.

The devouring effectiveness and strength aren’t proportional to the size of the ammunition that is being used. A bazooka shot will eat away at things same as a bow/arrow would. When a enchanted projectile hits something, the effect is applied to the area of impact and doesn’t really care where the ammunition goes after that. The devouring only works on matter and can't consume something that is protected by some outside effect like a Siberian's invulnerability. It ,however; can consume things like Alexandria's flesh. His power spreads through materials that are within contact with affected area so if there is gap of space between the area and something else it will not spread to it.