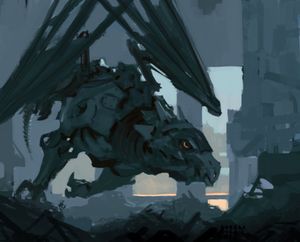 Fafnir inside his Bio-mechanical exo-skeleton

Fafnir appears as a silvery white clockwork biomechanical construct, in the shape of a small dragon. He is roughly the size of the average housecat. He has a single purple eye, and sharp vestigial wings. As he grows, a shell of blackish metal will grow around him, containing clockwork pieces, until this initial form is completely covered. His initial state weighs 10 kilograms

Fafnir is obsessed with growing stronger, and pitting himself against worthy opponents. He adores fighting, and he especially adores fighting people he sees as strong.

Fafnir loves rhymes, riddles, and games, seeing them as another form of battle, and will often work to make his sentences rhyme even during normal speech.

Fafnir’s power is the ability to integrate metal into his structure. Metal shifts into clockwork mechanisms as it is processed. This clockwork structure grows around Fafnir's initial body, and is not Manton protected, though he still feels, sees, tastes, and smells through it. He can disconnect the smaller initial body from within it and flee, leaving the husk behind. Damage to the outer body can be repaired by adding more metal to the damaged sections, but he can never exceed his daily 20 kilogram processing limit. He cannot process tinkertech materials.

Fafnir's metal has roughly the strength of steel plating. He does not sleep, and he does not breath. His metal shell does require cooling when in active use, so he must consume water, or other suitable liquids such as freon. He exhales steam when in high stress situations.

Fafnir can move quickly, and can reach a top speed of 45 K/PH, similar to a housecat.

Fafnir starts with a bite force of 200 PSI (Pressure per square inch) in his initial form, and for every kilogram of mass gained, he gains a 2.5 PSI increase in his bite force, up to a cap of ten thousand PSI

Fafnir has a processing weight limit of 20 kilograms of material per day, he cannot process any more metal than that. As he grows, he also gets stronger proportional to his weight, as in the chart below.